On 11-12 February 2020, the 6th “Physics of Volcanoes” workshop (PoV-6) of the DGG Arbeitskreis Volcanology was held at the Geomatikum at the University Hamburg. This meeting was supported by the DFG and of course again by the Arbeitskreis Vulkanologie of the DGG. The workshop was organized by Lea Scharff and Matthias Hort, with the help of 2 Hiwis and 7 MSc-Students helping service, setup of poster walls and more. A big thank you!

Participation for presenters and guests was again (as always for PoV) at no cost!

The aim of the 6th workshop taking place at the University of Hamburg was to get together volcanologists exploring the physics and processes at active volcanoes around the world. New developments in technologies and methods, as well as new insights and scientific results, were presented and discussed with the aim to strengthen our research network. To maximise interaction, there were both talks and presentations of posters. Colleagues from research centers, universities, labs, and others, contributed.

The time allowed 30 talks and 16 poster presentations. The topics have changed if compared to the last years, but were well received by everyone, covering:

There were 79 registered participants, but actually more were counted in the seminar room. Due to a storm over Germany, some participants cancelled their travel. Everyone liked the relaxed atmosphere and ample time for discussions and coffee meetings. Early-career scientists appreciated the presentation of an editor of Nature Communications, with important hints and ideas for everyone.

The PoV annual workshop series provides a platform for volcanologists in Germany to strengthen our research network through the exchange of scientific results, newest developments and work-in-progress. To maximise exposure and interaction, there was both plenary presentations of posters and talks.

The 5th workshop was realized near one of the most scenic volcano place in Germany, organized by Hardy Pfanz and A. Thomalla from the University of Duisburg-Essen, with local support by W. Kostka, W. Riedel, and C. Kosch of the Deutsche Vulkanologische Gesellschaft (DVG), logistically and financially supported by AK Vulkanologie of the DGG, and realized at the Naturfreundehaus near the Laacher See.

The conference was again in the first weeks of the semester break, starting with an icebreaker from 27 February, with 2-days of poster presentations and talks, and ending with an excursion on 02. March 2019 which was held by Prof. H.-U. Schmincke.

The exact number of participants is not known, but we temporally counted over 130 people in the room, 115 were registered. The room was packed, over 40 oral presentations were given, and discussions were lively and packing. Frequent breaks and project

planning allowed taking a breath. Highlights were also off-discipline presentations, such as volcano-biological results, insights from pilots about ash encounters and more.

There were four topical sessions, the first focusing on Eifel Volcanism, others were Physics and chemistry of magmatic processes and melts, Volcanic monitoring, Volcano hazards and risk mitigation. The session on Eifel Volcanism was generally found of particular interest, stimulating new research initiatives and discussing recent findings of seismic unrest and deep low-frequency events (Hensch et al., 2019) beneath the conference venue. 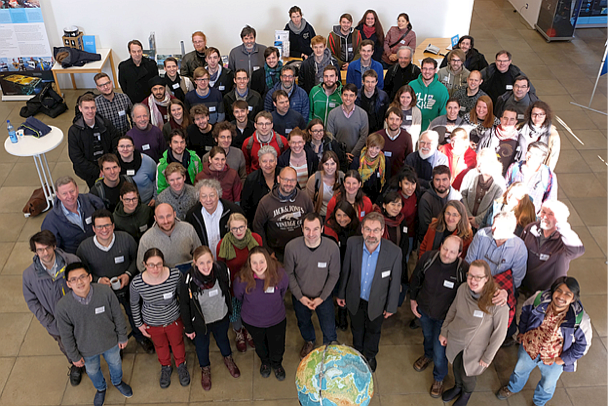 On 1-2 of March 2018, the 4th “Physics of Volcanoes” workshop (PoV-4) of the DGG Arbeitskreis Volcanology was held at the GEOMAR Helmholtz Centre for Ocean Research in Kiel. The workshop was financially supported by GEOMAR and the DGG and organised by Karen Strehlow and Thor Hansteen. Topical sessions this year were Physics and chemistry of magmatic processes (convened by Matthias Hort and Ulrich Küppers), Volcanic hazards and risk (convened by Karen Strehlow and Christoph Helo), Volcano monitoring and remote sensing (convened by Thor Hansteen and Ulrich Platt), and – as a tribute to the location – Submarine volcanic systems (convened by Philipp Brandl and Colin Devey). 23 German institutes were represented by the 103 participants, 82 of whom from outside GEOMAR. The quality of the presentations was very high and we enjoyed many exciting talks in the plenary sessions as well as a diverse choice of posters. To maximise exposure and interaction, topical break-out sessions were held in the afternoon for a more in-depth discussion in smaller groups and quick oral presentations of the posters. The discussion groups were a great success and well perceived by presenters and audience.

The PoV annual workshop series was initiated in 2015 by the DGG Arbeitskreis Volcanology and provides a unique platform for volcanologists in Germany to strengthen our research network through the exchange of scientific results, newest developments and work-in-progress. Especially students and early career scientists are encouraged to join these meetings; the PoV is free of charge and presentations are held exclusively in the English language. Therefore, PoV workshops attract many of our international students and are a great opportunity for young scientists to make connections and learn about the community’s work. We are excited that this series will continue in 2019 in Mendig in the Volcanic Eifel, under the co-organisation of Hardy Pfanz (University Duisburg-Essen), Lothar Viereck-Goette (University Jena) and the German Volcanological Association (DVG). 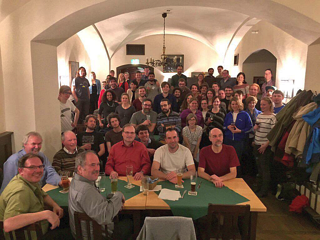 Zusammenfassung aus den Mitteilungen – Rote Blätter: The 3nd Workshop of the Physics of Volcanoes of the DGG Arbeitskreis Volcanology was held at the University of Munich, LMU. The LMU, hosting one of the largest volcanology groups in Germany, was organizing four topical sessions: Physics and chemistry of melts (convened by Christoph Helo, Kai-Uwe Hess), Physics of magmatic processes (convened by Jonathan Castro, Ulrich Kueppers), Volcano monitoring (convened by Lea Scharff, Joachim Wassermann), and Volcano hazards and risk mitigation (convened by Bettina Scheu, Thomas Walter). Participation was limited to 120 persons, first come first served. The first 15 PhD or PostDoc students that registered and presented were invited for a typical Bavarian meal. The Organisation Team was Kai-Uwe Hess and Ulrich Kueppers. Exciting talks were given by many scientists, including Don Dingwell, Chris Breitkreuz, Hardy Pfanz, Andreas Klügel, Eleonora Rivalta, Birger Lühr, and much more. We are all excited to continue these discussion in forthcoming Physics of Volcanoes workshops! The Workshop 2017 was co-organized by the DGG and the DMG (mineralogists). 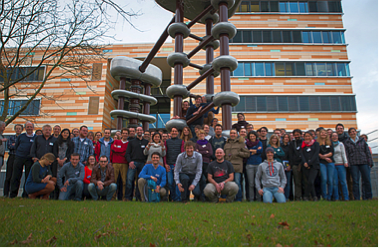 Zusammenfassung aus den Mitteilungen – Rote Blätter: The 2nd Workshop of the Physics of Volcanoes of the DGG Arbeitskreis Volcanology was held at the University of Mainz. After PoV-2015, the first workshop at the GFZ Potsdam in 2015, the 2016 workshop attracted even more speakers from across Germany and beyond, and hence underlined the success of the workshop initiated by the DGG Arbeitskreis Volcanology. Organized by the University of Mainz (Nicole Bobrowski, Christoph Helo, Basti Müller, Jonathan Castro), the University of Heidelberg (Ulrich Platt), and the Max-Planck Institute for Chemistry in Mainz (Thomas Wagner, Marloes Penning de Vries, Christoph Hörmann, Florian Dinger), this workshop could emphasize the strong links between the physics, chemistry and geophysics fields in volcano research, stimulating novel techniques and methodological advancements. The workshop was therefore also supported by the DGG (German Geophysical Society), the DPG (German Physical Society), the MPIC, the VAMOS project, the JGU, and Springer publisher, which is why no registration fee was charged, allowing many early career scientists to join the meeting. Four topical sessions were covered, 1) Seismic methods (Conveners: Torsten Dahm, Joachim Wassermann) with a keynote talk on volcano seismology in a wider volcanological context by Prof. Jürgen Neuberg. 2) Volcano remote sensing (Conveners: Ulrich Platt, Thomas Walter) with a keynote talk on the exploitation of the full spectrum of remote sensing for volcanic hazard mitigation by Simon Carn, 3) Volatiles in melts and plumes (Conveners: Kai-Uwe Hess, Nicole Bobrowski) with a keynote talk on magmatic degassing by Thor Hansteen, and 4) Physics of magmatic processes (Conveners: Jon Castro, Ulrich Küppers) with a keynote talk on the physical processes controlling the frequency and magnitude of volcanic eruptions by Luca Caricchi. The Workshop 2017 was co-organized by the DGG and the DPG (physical society).

This website uses cookies to improve your experience while you navigate through the website. Out of these, the cookies that are categorized as necessary are stored on your browser as they are essential for the working of basic functionalities of the website. We also use third-party cookies that help us analyze and understand how you use this website. These cookies will be stored in your browser only with your consent. You also have the option to opt-out of these cookies. But opting out of some of these cookies may affect your browsing experience.
Notwendige immer aktiv